I didn’t finish the JFK 50 miler. I haven’t dropped out of a race since 2013 and I’m not going to lie, this one really stings. I ran a smart Appalachian trail section and was in cruise mode on the towpath closing down a 7 minute gap to 2 minutes off the lead. I thought at 34 miles that I was going to pull into the lead and win. But that didn’t happen as my body completely shut down and I had to drop out at 39 miles. Why did this happen? I looked at my pacing and it was conservative for the first 15 miles and I was running the pace I was looking for on the towpath. My nutrition was actually perfect for once. This is usually the issue for me in races beyond the half marathon but today it was a non issue. I took gels at 40 minute increments for the first 2 hours and then every 30 minutes after. I took 3 cliff blocks every 45 minutes and was taking in both water and flat coke at most of the aid stations. I should have been fine which is why I am extremely frustrated about this. I don’t know 100% for sure what went wrong.

The nature of the course is 50.2 miles starting with a climb up the road for the first 2.5 miles and then 13 miles on the rocky Appalachian trail, 26.3 miles on the C&O towpath and 8.4 miles on the road to the finish. The gun went off at 6:30 AM as I barely made it to the start line on time. A group of about 8 guys started together in the dark and windy conditions. The temperature was supposed to be 12 degrees with light rain (that would not be the case). The group settled around 6:30/mile pace for the opening mile before the climb started. It wasn’t too difficult of a climb but the group did split up. I found myself running beside Michael Wardian so we had a chat up the climb. I knew he has ran the race multiple times so I asked about the technicality of the Appalachian trail. “It’s an East coast trail so it is rocky. Watch out because the leaves hide a lot of rocks but it’s runnable”. I passed the 2.5 mile mat in 4th place feeling comfortable. The leader and the other guys in front of me were still all within about 30 seconds of me. After about 1 mile, the trail turns into a road which climbs over 1000 feet in just under 2 miles. I ran this climb pretty aggressively and moved up into a share of 2nd place, a few seconds off the lead before we entered back into the trail. It was here where it got super technical and rocky. I continued to run with 2nd place but kept twisting my ankle and was worried about breaking it (it is pretty swollen right now) so I slowed down to make sure I was more cautious. At 10 miles there was an aid station and an opening so I could see the gap to the front. About 2 minutes off 1st and 30 seconds off 2nd. Unfortunately, my lack of running on technical trails meant that I continued to twist my ankle and had two bloody falls onto the rocks. Nothing too serious but I was looking forward to getting off the trail. I have no clue how Jim Walmsley ran 6:50 miles on that trail. The last bit was a 1000+ foot drop in elevation over 1 mile. But don’t let that fool you, it was the most technical part of the trail with lots of rocks and sharp switchbacks. I left the trail with a 6-7 minute gap to first and 3 minutes to second. I switched my shoes and headed off to the towpath.

I was rolling smooth and comfortably on the towpath as the temperature dropped to around 0 and the rain began to start. My pace was around 6:20-6:30 per mile which felt slow and comfortable. I was getting feedback along the route about my deficit to the lead. It was 7 minutes at 24 miles but began to close. I was getting in the calories and feeling good but a little wet and cold in the rain. At 30 miles the gap was 4 minutes to first and 2.5 minutes to second. I was in a really good mental state and in the groove. My pace was around 6:15/mile and I was running strong. I took a quick bathroom break around 31 miles and maintained the gap to the first two guys. I hit the 34 mile aid station with a two minute gap to the lead but something wasn’t right. My vision became blurry and my arms and torso began to seize up. I left the aid station but began stumbling around and barely able to stay on my feet so I decided to walk for 30 seconds to get my bearings right. I started trying to run again but it was not any better. I began shivering and tried to put back some more cliff blocks and a gel but that didn’t seem to do anything. My body was freezing and shutting down. I knew my parents were at the 38.5 mile aid station so I wanted to make it there and assess my options. It wasn’t until 36 miles where I began getting passed by multiple runners and my competitive mentality began to dissipate. I could barely see anything or follow a straight line. I would try to run and would jog 7:30/mile for a few minutes before having to stop and get my bearings. I slipped back to 6th or 7th at the aid station 38.5 miles in. I tried to continue but after taking more calories I left the aid station and fell over. I stood up and tried running again but stumbled and fell over once again so I made the decision to stop after 39 miles.

Looking at how I was feeling, I think that dropping out was the right decision. I don’t think I could have even walked the last 11 miles to the finish. I am extremely disappointed in my race and my 2017 year in general. It’s unfortunate because I ran a really good first 34 miles and all of a sudden it fell apart. There are a few positives to take away from the race. For starters, my climbing in the early portions of the race was really solid. It felt comfortable and I probably had the fastest split on the hilly road portion in the middle of the Appalachian trail. Maybe I should do some shorter mountain races or vertical k’s because I believe that uphills are my strong suit. Secondly, my nutrition has always been an issue but it was bang on for once. In Pittsburgh, my nutrition was my downfall and although it was not the best at Run for the Toad 50k, it was manageable. At JFK, it was the first time I felt my nutrition was perfect. I wouldn’t have changed anything. Getting in around 20oz of water per hour with 600-800 calories per hour was a perfect mix of feeling good without putting too much stress on my stomach. I want to say my body shut down due to the freezing rain and cold temperatures and being improperly dressed for the conditions. That is what I am thinking anyways as there is nothing that would have indicated that I would fall apart like that. The pace never felt hard so it’s not like I was red lining or pushing the effort that hard. It was a conversational pace.

Overall it was an extremely disappointing race and I wish I could have it back. I thought at 33 miles that I was going to win. It was turning into this really solid day and it was my best executed, tactically smart race for 33 miles. I think I will excel at 50 miles my next crack at it but this one hurts mentally more than physically. It was an apropos ending to my frustrating year of racing. Coming off my best year in 2016, I had a ton of expectations of myself. Whereas I only had one bad race last year, I only had one good race this year. I know running is an extremely fickle sport but I trained a lot harder this year with no results to show for it. I had a crapping first marathon and a crappy first 50 miler. It felt like the universe was against me running a good race this year if I’m being honest. I am happy to be done with racing in 2017 albeit with a very bitter taste in my mouth. I hope 2018 will be better. There isn’t anything on the horizon right now in terms of racing but I do want to return to JFK next year and run the race I know I am capable of. I think that ultra running is what I see myself excelling at so more ultras will be in the future. I do want to run another marathon because I think I could take off 5-8 minutes easily on my next go at it but right now I need a break. Mentally I am down and very frustrated. Physically, I am feeling alright but I need some time to relax and not think about running for a week or two. Here’s to hoping 2018 will be the year 2017 was supposed to be. 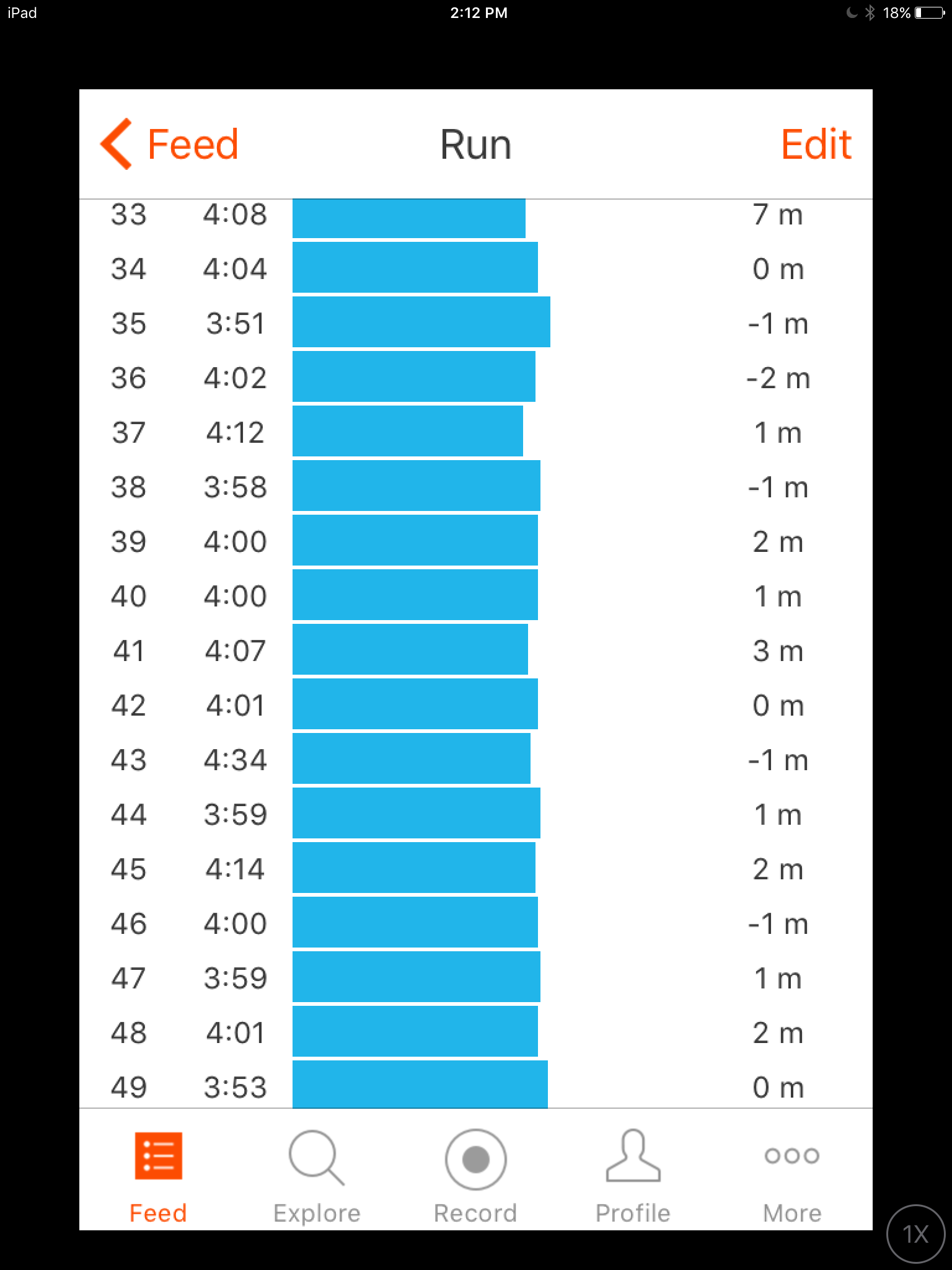 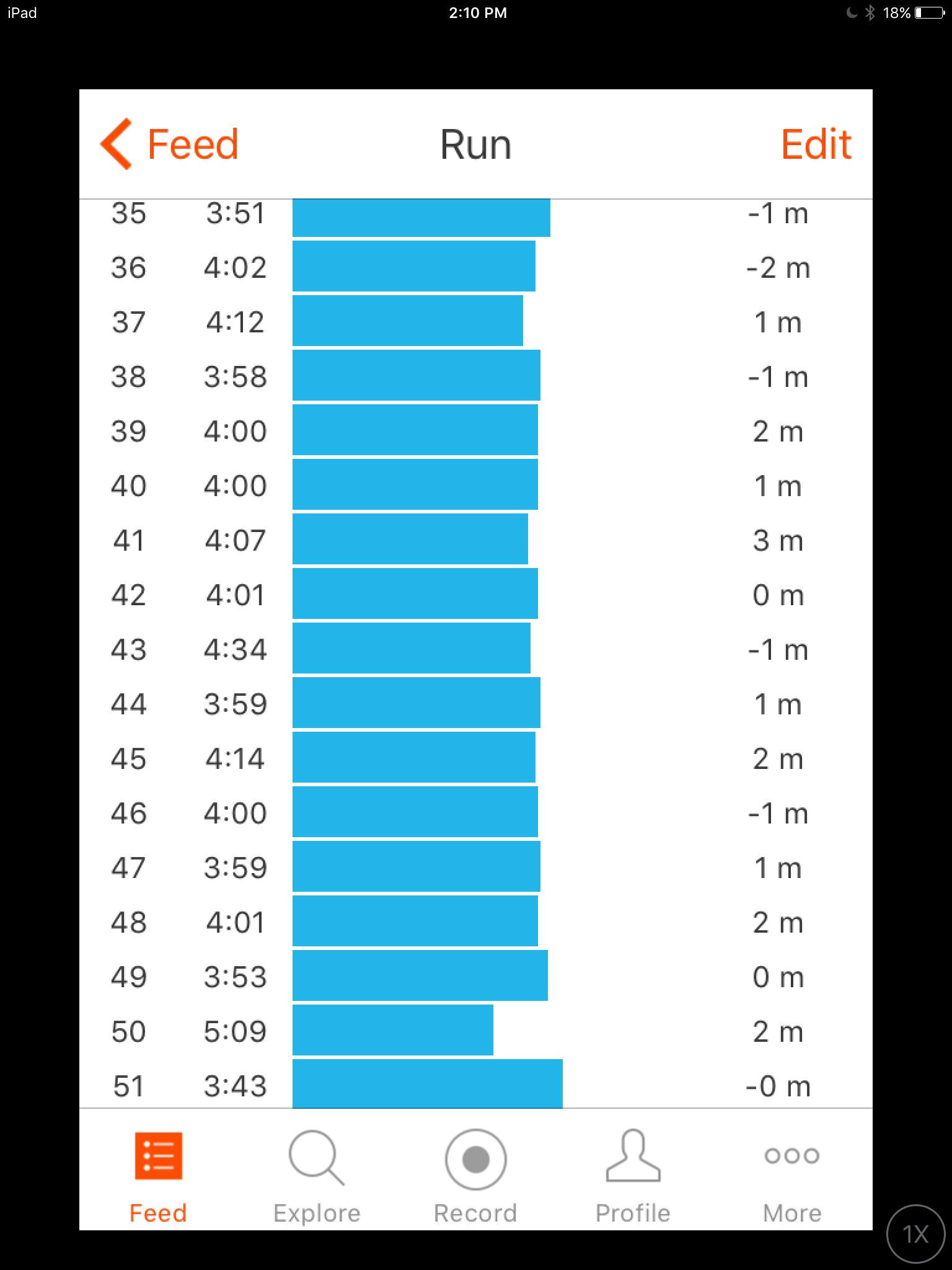 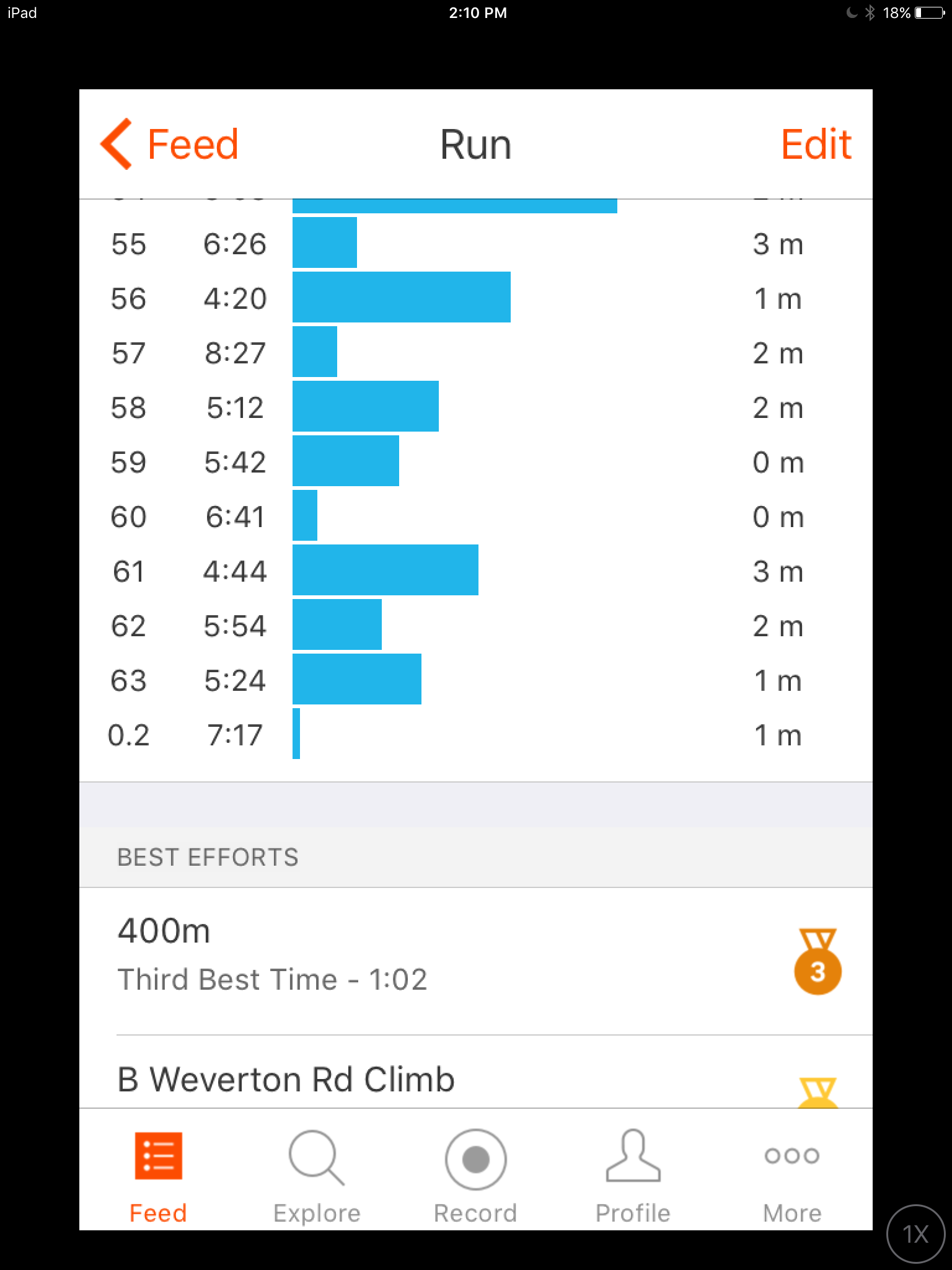 Even with the bathroom break at 50k, it’s pretty obvious where it fell apart at 55k.