I read an article back in grade 11 about UTMB, right around the same time I had started to get into running. I remember talking to my parents about this crazy race where people are running for over 160 kilometres through the alps of France, Italy and Switzerland. “Who in their right mind would ever want to do that?” was the answer from my dad. Well, I guess I’m crazy because ever since I heard about that race, the prospect of running distance beyond the marathon has always seemed so enticing to me. There is just something incredible about pushing the human spirit through gruelling races of endurance from 50k to 160k and beyond. This past weekend, I decided to take a step into that realm at the Run for the Toad 50k.

My decision to race it was very last minute. I was not registered until Thursday morning, two days before the race. I was also not tapered by any stretch of the imagination. I backed off my workout volume on Thursday and only ran 9 miles on Friday though to make sure I was somewhat fresh to run for 50k/31 miles. The plan was to really practice my fuelling strategy and gradually work the pace down. The nature of the course was 4 12.5k loops around the Pinehurst Conservation Area. I intended on starting conservative on the first lap, around 52:00 and try to take off a minute each lap so I would finish around 3:22-3:24, slightly over 4:00/k.
After getting to the race, I did a 5 minute jog to try and warm up but my hips were feeling pretty tight and sore, not an ideal feeling before the longest race of my life. It was nearly perfect conditions for the race, right around 8 degrees and sunny. I was fairly cold before the start so decided to wear an old pair of socks as gloves for the first part of the race and a long sleeve shirt under my Hoka One One singlet. “Don’t go out with the relay runners” was the mantra I had in my head at the start line. A mantra I completely disregarded as the gun went off.

I ran along with the USA and Speed River relay teams in the early portions of the race and began to worry about my pacing. I was already ahead of the rest of the field by the 4k mark but was concerned. I thought I had gone off way too hard for the race until I saw the 5k split right around 19:35. The pace felt easy and comfortable but I was way under 52 minute pace for the lap. Around 7k in, the relay guys dropped the pace very quick and I was alone as they pulled away in the distance. The temperature was really warming up so I tossed my sock-gloves to my parents who were at the 9k mark. “I feel really good!” I yelled as I passed them. For the first lap, I was also anticipating Skeleton Hill at the 11.5k mark, a hill I would traverse 4 times in total. It was incredibly steep and I was barely running faster than a walk up it. I completed the first lap in 48:40, 3:20 faster than anticipated. I also realized that I had not taken any gels or liquids the first lap and began to worry. 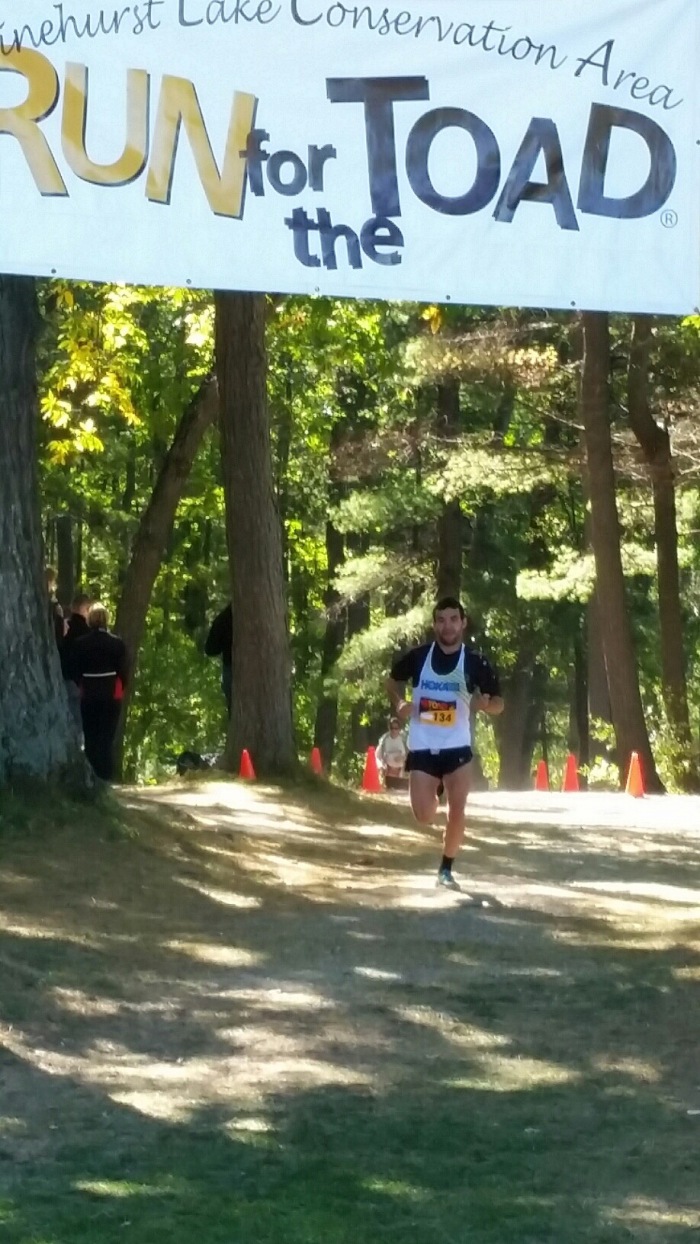 I started grabbing some cups of water and Gatorade at the first aid station on the second lap (12.8k in) and planned on doing so at every other aid station along with taking a gel around 7-8k into each lap so I could grab water at the 8.8k aid station. The second lap passed without much happening but I passed through 25k in 1:36:31, well under the 1:43:00 goal. I made the decision to just roll with it and keep the pace chugging along as it still felt fairly comfortable. I was completely unaware what my lead was but I figured it was a decent amount. I knew all I had to do mentally was get through the third lap, 37.5k into the race, and I would finish well. The only question was how fast would the time be. My parents were at the 9k mark, 34 kilometres in, and I yelled out “I am running way under pace! I might blow up!” to them. My third lap was 47:55, the fastest lap yet as the clock read 2:24:XX with 12.5k to go. I started doing the mental math incase I really started to blow up. “I think I can run 50:00 this lap. Under 56:00 and I am still under 3:20”.
On the last lap, I started to feel some of the hills I had not felt before. Each uphill was not too bad but the last 6k, the downhills really started to hurt. I think my marathon split was around 2:44 as I entered uncharted territory. I also started struggling to run low 3:50/k on the constant rolling hills but I still felt pretty relaxed.  If I could get to the top of Skeleton Hill, the race would be over. It was a brutal climb 48.5k into the race but it was amazing getting to the top and knowing I was almost done. I was really checking my watch the last 1.5k to see what my time would be. To my surprised, I didn’t blow up at all and still felt relaxed in the final stages as I crossed the line in 3:13:41 with a 49:06 last lap, averaging 3:52/k or 6:14/mile, the third fastest time ever on the 50k course with roughly 3500ft of climbing.

Overall, I would say this was a fairly surprising performance as I was not tapered or peaked having been running over 120 miles per week the last 3 weeks in a row. I can officially say I have now ran an ultra marathon and for longer than 3 hours! I would like to thank the race directors, George and Peggy, for putting on a stellar event. I had only heard incredible things about the race beforehand and will say that it is one of the best races in Canada, regardless of road or trail. I highly recommend anyone who is looking for an introduction into trail racing to attend Run for the Toad next year as it is a race you don’t want to miss! In terms of what is next, I took Sunday off and am back to training again Monday to prepare for my big goal race this November. I am still trying to keep the race plans on the “down-low” but it’s tough because I am so excited!

Keep at it,
Seth